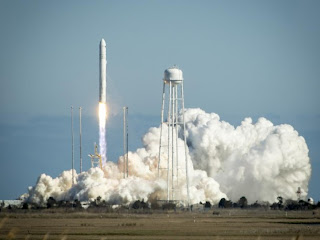 It’s a lazy Sunday afternoon and I am listening to the kids racing up and down the block – frolicking is evident as merry squealing and giggling appears to accompany the running. The English bulldog, half deaf and half blind as he is, barks as they dare run through his gate and disharmonize his turf.

In the kitchen, Mom is making a giant apple pancake and in the bedroom, I sit back and watch NASA-TV on my big screen. Thankfully the budget crunch has not completely eliminated the streaming of some of NASA’s programming.

I’m watching the Antares rocket launch. Of course, under normal circumstances I’d watch the opening of a soda can if NASA was involved – I am a space agency groupie and have always been!

I am watching this launch though for research, though.

I may not be writing at the moment (distracted by regular life slapping me around). I can, however, still perform other activities to support my writing… The story for Love and the Android will require a thorough understanding of commercial payloads making their way to the ISS, where our protagonist lives.

I have drafted scenes for a couple of the ongoing projects, though none have been fleshed out yet. I’m trying to get through this moment as unscathed as possible (and, if not, take notes for later). The important thing here is that writing and servicing these stories is never too far from my mind. It’s the best I can do until life straightens itself out at my end.

I wonder if this will eventually turn into a celebration of Kubrick, a sort of Eyes Wide Shut meets 2001: A Space Odyssey.

Whatever the case, I like the idea of the story developing in the same way I may put together a stew: I know the elements that I want in it and I am tweaking the condiments and adjusting the quantities.

The question, I suppose, is how I’ll ultimately describe images that are already embedded in people’s minds. Then it occurs to me, not everyone is a NASA Junkie – so that describing launch images can become a challenge in itself.

Non-science geeks always complain that they find the long silent bits in 2001 “boring” and my goal would be to recreate those, in writing, but make it interesting (if not downright exciting).
Posted by KaliAmanda at 10:19 PM No comments: 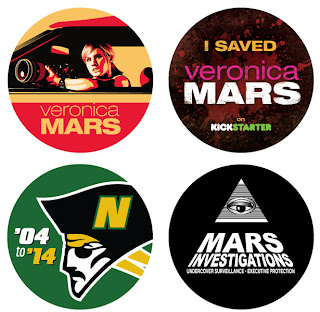 Last month, a Kickstarter project went up to fund Veronica Mars movie. There was plenty of eye-rolling and derision (“RLY? Who asked for this?” “Veronica Who?!”)

In five hours, fans had pledged $1 million (half of the projected budget). The project page just closed about half an hour ago from the time I write this and they’d collected almost $6 million from over 91,000 backers.

This ought to be quite an education to network executives (those willing to learn and those not living in a bubble). Yes, the show had a relatively small audience but that small audience can drop $5.7 million for a movie the studio would have never greenlit.

Kickstarter and Indiegogo have given power back to the content creators and fans, and this will revolutionize the way people consume their art and entertainment. It has already changed things, but big business has taken little notice…

The news of the Veronica Mars movie project will put a giant magnifying glass over this trend because of the amount of money raised.

Combined with the final take (box office, if released wide), DVD-sales and streaming distribution, and promotional sales this will likely become a profitable endeavor. Soon the studios will be used mainly for distribution deals, and if a streaming world that is not even needed for all projects.

This is putting ideas in my head and I am thinking of scripting short animated pieces to match the stories on Because She Was a Woman, for instance. It democratizes the delivery of art and entertainment by attracting the people sooner into the process. Everyone can become a patron and it is neither prostitution nor content creation by committee – there is no need for the creator to compromise her vision.

I keep seeing new media jobs going to entry level prospects because the old guard, not knowing what knowledge is needed, rely on the idea that kids can figure it out and they won’t have to pay them a king’s ransom for their service. I believe they also feel that they can train these young ’uns into doing business as usual – which completely misses the point.

All this does is delay progress by slowly adopting new technologies but adhering to marketing strategies that have yet to catch up and in doing so adding poorly scripted analyses and showing no to little profit in adopting new ways. It’s a vicious cycle!

Some book projects have been created this way and I predict that authors will soon take over auxiliary projects by repurposing their own writing (short films, music, graphic novels, based on their writings).

Will we all command a $5.7 million payday to create our content? Probably not, but it frees us to dream and propose the dream to others who may partake in sharing that dream. It evens the odds for the truly talented. This is a very good thing indeed, don’t you think?
Posted by KaliAmanda at 1:51 AM No comments: