My Brain Has Gone All Euro! 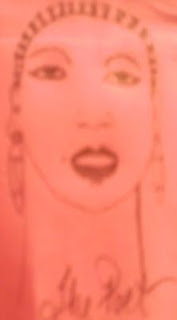 August has hit me like a ton of bricks. I don’t really have an explanation for it other than I have been stunned into inaction.

All creativity has not exactly stopped but rather slowed to a quantum level. Ideas are not roiling so much as simmering.

It’s not exactly a matter of staring blankly at a white page with nothing to say but more a matter of having no desire to open the page and get started. There’s a to-do list foremost in my mind. What is missing is the drive to start checking things off.

It feels as if my brain has simply sent itself off on a late summer holiday, given up on the idea of getting anything else done and left the rest of me to hold the fort.

That’s right: my brain has gone fishin’ till autumn arrives!

In the meantime, I doodle the imagined faces of the heroines of the upcoming Because She Was A Woman, my volume of a dozen vignettes. Pictured above is my first try at The Poet, the lead character in a heartbreaking piece about love, life and poetry. I’m thinking of including the art work in the paperback version.

That’s probably the most I can manage until September arrives and my brain returns…
Posted by KaliAmanda at 11:24 PM No comments:

One of my goals in this self-publishing experiment is to write in as many genres as I can. Of course, I realize that I will not achieve success in all genres – not for lack of trying, but because I have no frame of reference for some things, like romance (unless it is tragically comedic in nature).

The latest experiment, of course, is Chronicles of Ash – a steampunk-inspired fantasy. Why steampunk? It is not the most popular genre but it is an interesting amalgamation of sci-fi, speculative fiction, and fantasy.

It’s not just robots and steam-powered gadgets; it’s also the Victorian/Edwardian politics and mores – the glitzy exterior and its dark underbelly. It’s about turning history on its head and having your way with it. It gives you the opportunity to release esoteric characters that get minor play in the history books and give them a starring role. It’s about making the familiar strange and the strange oddly familiar. It’s a play on words based on a play on your perception of reality.

On the logo for Amapola Press, the words “Expand your Horizons” appears as the motto for the small press. This is meant to be true for my readers as it is for me. I want to be able to discover new things as I embark on all these fantastic journeys.

Another one of my goals is to include at least some Latino flavor in my writings, simply because it is largely what defines me and I think everything is better with a little Latino flavor.

For this reason, one of the characters in Chronicles of Ash is a . You can get a feel for her sassiness in an excerpt now running at Tiki Tiki blog (with a special offer for readers). In it, Pilar is the longtime housekeeper, companion and nanny for Ashleigh’s family on Earth before Ash is transported to the strange new world, and she is having a conversation made up entirely of facial expressions and what we refer to as The Look.

The Look is something most Latinos are familiar with, and while most married couples of all racial make-ups have a similar shorthand; mother figures have perfected it to a whole new level and an art form.

I am not at all concerned about perpetuating the stereotype as Latinas as servants. Pilar is an intelligent, dedicated professional, and an independent and strong-willed woman who has never lost her identity to her duties but who has a passion to perform her responsibilities in the best way God allows her because she knows the influence she yields.

So how do I ensure that Pilar doesn’t become a stock sit-com character? Her planned role during the nine-book series will change too, as Pilar has big things coming for her as does our heroine. More importantly, she needs to be a whole character, three-dimensional.

Of course, you want this of all your characters, but I feel a great responsibility for the Latino characters I introduce because it is imperative that I show them in all their glory, which varied and delicious, just as in real life (but bigger and more fantastic).
Posted by KaliAmanda at 2:02 AM No comments: 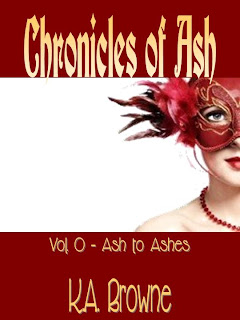 
The e-book is now available at Smashwords here: https://www.smashwords.com/books/view/210775
A free excerpt can be found here: http://amapolapress.weebly.com/freebies.html
The title will roll out to other online retailers during August 2012, and Amazon will carry both e-book and paperback versions.

The introductory volume of Chronicles of Ash is almost ready to be set free into the world of e-books!

Planned as a nine-book series, the fantasy is a steampunk-inspired series of stories of Ashleigh Peters, a young woman from that finds herself sucked into another world.

This is both strange and awfully familiar, and Ashleigh often wonders if she is in some sort of coma, the victim of drug-induced dreams.

While the series introduces some familiar characters, they turn out to be not what we assume them to be, and to Ashleigh it all feels like some sort of extended “masquerade-slash-operetta.”

In Vol. 0 – Ash to Ashes, the action begins well into our story as Ash, her attendant and an old lunatic simply known as the Maestro test a human flying machine from a cliff in . The chronicles then flashes back to Ashleigh’s last days on Earth and we meet her family, learn of her life in Brooklyn and what she leaves behind as she is transported to this new world.

As the story begins, we get the hint that Ashleigh’s travels may not have been a fluke of nature, that there is a reason, a force guiding it. This fact is what propels the series forward, and as her chronicler points out, puts into question whether Ashleigh is some sort of savior or an agent of nefarious forces.

The series is both a travelogue and diary of Ashleigh’s life as she unravels the mysteries of and how she came to it. Will she ever learn how or why she was brought to this ? Will Ash be accepted or condemned? More importantly, will she ever find her way back home?

Chronicles of Ash is the continued experiment in trying to publish in a variety of genres.

Posted by KaliAmanda at 12:40 AM No comments: