Every year you take the NaNoWriMo challenge it is a different experience. The manuscript of my first novel was so bad I killed it with fire. The second one resulted in my first published novel. Last year, it was a disaster: I could not finish.

This year I outlined a story and I have followed it to some degree, but it’s very “first drafty” and I know that a lot of it will not survive rewrites. One wants the words that flow to be beautiful and poetic, and ready for publication!

The ongoing joke, as I shared my status with friends, was that I had not yet used the unicorn. This is the idea that if everything else falls apart, you can always add a unicorn.

Magic and fantasy changes everything.

Last night, as a joke I threw in a unicorn reference… There is a festival taking place and the headlining act is a cover band called Monkeys on Unicorns.

The ensuing comments after I announced the unicorn development resulted in the following dialog (shortened here) which made me laugh out loud:

“At any rate,” Gábor was saying, “after I figured what it was, I was almost disappointed because there just was no way these guys could improve on my first assumption. But it’s not a bad band, I liked them.”

“Why disappointed?” she asked. “I don’t understand.”

“Well, when you called, I thought you said we’d go watch monkeys on unique corns.”

“Monkeys on Unicorns,” she corrected.

“Don’t you know what a unicorn is?”

“I did not discover children’s stories until I entered school,” Gábor said. “And I rejected most of them as ridiculous. My education, therefore, is rather incomplete in terms of whimsy.”

He was standing over her as her swing came to a full stop.

“Well, what did you think monkeys on unique corns would be?”

“Monkeys riding perfectly cylindrical ears of corn,” he said a little too quickly. “Like some retro circus act.”

The image alone made her let out a belt of laughter that echoed across the park. She threw her head back and the neon colored oval swing began its oscillation, then she kicked at the ground and she was off again.

“So, at what point did you realize it wasn’t going to be that?”

“I saw their band logo,” Gábor said, crestfallen. “At first I thought it was even better: you know, monkeys on horses; then I looked closer, but without my glasses, and figured the horn could be an ear of corn on a horse’s head, because there was corn! But I quickly realized that was just ludicrous.”

Maya was laughing so hard she was struggling to hang on and gasping for air.

Posted by KaliAmanda at 11:39 PM No comments:

There is this cool wind of euphoria that comes when you are in the zone and the words are coming fast and furious. There’s clarity and joy, and you write faster than you can even think, it becomes an instinct.

It’s like a drug, but better: it’s legal, has no side effects, and it costs absolutely nothing. 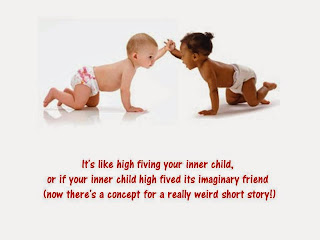 I think that is part of the allure for NaNoWriMo.

I’m almost in love with the process right now. Almost halfway through the novel and I have yet to stall (or resort to throwing a unicorn in the story to save a failed plot or faulty research).

I say “almost” because along with NaNoWriMo I am spending time writing dozens of cover letters to send with tweaked resumes, as well as dozens of proposals for freelance projects. Making more progress on the novel than the day job search is a little discouraging and balances things out in the joy department.

So life becomes an exercise in patience where I can be fertile in creativity but fruitless in efforts to move ahead professionally, at least for the moment.

Of course, I realize that the moment I start working full time, it will take time off the writing because it will be the bulk of my day. At this point, it looks like it may not be until after the holidays that I find a desk of my own. 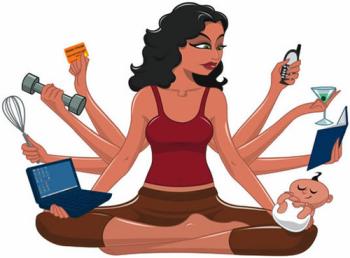 What's a little multitasking amongst us girls, right?

That means I need to put more effort into freelancing and I’ve seen many projects cancelled in the last few weeks. It’s brutal! I am getting invited to submit proposals by clients, so it’s not like I am competing with the whole field out there, just the experts. This is excellent and promising, as long as I remain patient.

This is still not a work blog, but the freelancing does involve writing and publishing services.

So, let's review: I have no news, yet, except that I am still in the running because I will not give up. Also, I write, and I love the process.

NaNoWriMo progress: The story has become a side-by-side/alternating tale of the two sisters as they move through life and become stars on their own right – which may not all survive in editing, but is helping me flesh out both characters.

A plot twist suggested itself in dream form last night (yes, I dreamed I was writing). It isn't what I outlined, but I will allow the story to go in that direction because if feels organic to the story as it develops. (Don't you wish life were that easy and malleable some days?)

As long as I remain disciplined and patient, rewards will find me: the words will continue to grace the page, projects will be offered, interviews may start to materialize.

I remain hopeful in all fronts.

Now, what shall I call that unicorn, in case I need one later?

Posted by KaliAmanda at 11:58 PM No comments: