Posted by KaliAmanda at 2:01 AM No comments:

Posted by KaliAmanda at 10:57 AM No comments:

We have been binge watching “Nurse Jackie” and the process has been illuminating. Between us, we’ve known several addicts (from the functional, like Jackie, to the dragged out, street-living junkies).

The addicts were not always the artists and musicians; there was plenty of upwardly mobile, educated professionals doing some industrial type of crap (coke, heroin), and managing to fool the many. It’s easy to do this if you can maintain the habit. It’s depressingly easy to manage, if you can afford it.

It’s never pretty and it is never fun. It can be funny, but only if you are watching from a safe distance and are not involved, at all.

There is nothing new in the series about addiction and addicts, but I did have a revelation about someone that crossed my path not long ago.

I do not know this person to be a substance abuser; but it occurred to me that their drug is deception...

I know it sounds ridiculous, but follow my logic. It seems to me this person experiences a high every time they tell a lie. Except they are not outright lies. They are half-truths and innuendo. It’s telling enough details of a thing and letting others take it to its logical conclusion without ever having actually said the thing itself and yet, making it true in context.

This person once “confided” that they were stunted socially because they were surrounded by people whose background exceeded their own somewhat inferior origin story.

To compensate, this person picked people that could be manipulated easily – emotionally damaged, broken people, those who were uncertain and insecure.

But the point was never to be smarter but just cleverer. The goal was to be sly. 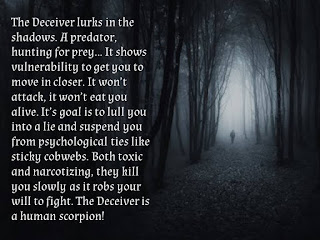 I don’t see the value, but then I have never been an addict. I’m the woman who decided, after years of smoking, that it was too expensive and I didn’t need to keep spending money on the habit, and I just stopped. Same with drinking.

I just stopped. No anxiety, no yearning, no nothing. There is nothing that I “need” quite that badly. I love caffeine and chocolate, but even these I can live without. (I mean, seriously, who would want to do that?! But I have gone long periods without and it did not kill me.)

I understand the physiology and psychology of addiction, even if I am fortunate not to be under its claws. It is a sort of ogre that looms over a soul that depletes its own humanity for just another high.

Junkies have a pathological excuse. The Deceiver makes a conscious choice that is as easily avoided by not trying to get over on fellow human beings. There is no reward to the behavior!

Almost makes junkies sympathetic by comparison. But then, even “Dexter” was sympathetic in some ways, and he was a serial killer.

Hark! Inspiration’s muffled screams have reached the surface. I think I have disturbing stories to write in my down time. Hail the anti-hero! (Or is it kill the anti-hero?) 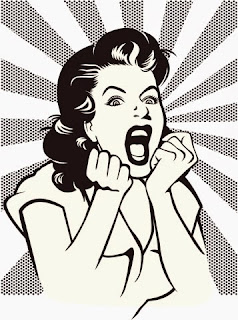 So, whatta think, too dark?

Posted by KaliAmanda at 9:29 AM No comments: