One Last Tribute for B.B.

I emerged for some air, as I worked my way through a couple of freelance projects, to the news that B.B. King was gone. The thought brought me a wave of sadness, and then I smiled. 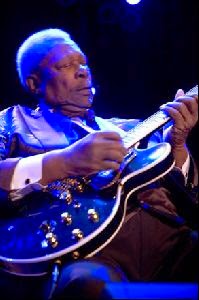 There will be endless words written about the man, his music, and his gigantic influence on blues, rock, and even pop music for over half a century in an international stage.

Every decade of my life has a handful of B.B. King songs and each adds value to big moments – from friendships to breakups, from births to deaths, from laughter to tears, from life-affirming magic to soul-crushing disappointments.

His music has been there, in my life, since I was in the womb. In fact, he had a really great year right before I made my own debut and I know for a fact that I was exposed to it.

B.B.’s passing reminds me that some people I have loved dearly are no longer in my life and it amplifies the sadness. Still, in the back of my mind, I can hear the guitar wailing The Thrill is Gone… That was the first B.B. King song I ever learned, but it means so much more to me--it links me to him in so many ways, and to people I loved, and a time when I was the happiest and the most miserable I have ever been.

I wrote a piece about meeting B.B. and listening to him play at the Blue Note in New York, one of my favorite memories. In fact, the mini-memoir was one of the first things I put out when I started publishing, and the first I translated to Spanish.

I wish I would have the opportunity to do that again, to sit in a small room and listen to B.B. make deliriously and heartbreakingly beautiful music. I wish I could have another moment with him because the last one still touches me deeply.

And so, finally, Lucille is silenced because nobody will ever touch her the same way, and I feel her pain. The sound, though, the sound remains deep inside me because it is part of the soundtrack of my life.

I am grateful I could look the man in the eye and thank him, just thank him for the music. All my vinyl, CDs and digital files aside, it was that fleeting instant that means the most to me. But I am grateful to have the music to remember him, and my own living blues. I will be blasting the blues all weekend long, that's my tribute.

Posted by KaliAmanda at 8:23 AM